Congenital Scoliosis: present at birth, although it may not immediately be identified. 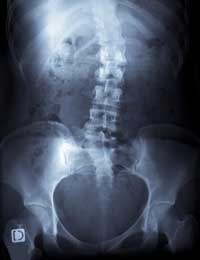 What is Congenital Scoliosis?

The main causes of congenital scoliosis include:

The presence of malformed bones does not necessarily result in a scoliotic curve. For example, two wedges on opposite sides of the spine may balance each other out. However, if both wedges are on the same side then the abnormal curve will be accentuated.

Combination of Formation and Segmentation Failure

It is possible for both wedged shaped bones (formation failure) and connected bones (segmentation failure) to be the cause of congenital scoliosis. This is referred to as a mixed deformity.

The above developmental defects of the spine can range from mild to severe and they can affect one or multiple areas of the spine. The degree to which these occur will determine the severity of the scoliotic curve, the symptoms, as well as the requirement for treatment.

Children with congenital scoliosis usually do not experience any pain. Potential signs and symptoms of scoliosis can include:

Often congenital scoliosis is detected during an examination at birth. However, if it is not detected at birth, it can remain undetected until there are obvious signs and symptoms, which may take years.

How is Congenital Scoliosis Diagnosed?

The following are used to evaluate children for congenital scoliosis:

This includes an interview with a doctor and a review of any medical records. These are done in order to determine the presence any medical conditions that may be causing the spinal curvature.

Items that will be looked for during the exam include:

A thorough examination will be performed to determine if there are other congenital abnormalities.

Children with abnormal spinal curves and/or signs of underlying medical conditions will need imaging studies. These may include X-rays, CT scans, or an MRI of the spine. Which of these imaging studies will depend on what conditions are suspected to be involved in causing the scoliosis. An abdominal ultrasound is frequently used to examine the internal organs of children with congenital scoliosis.